Ideal candidates for this seminar include physicians as well as other health care professionals involved in the daily management of cardiac patients in the office, clinic, or hospital settings.

Objectives:
Participants will be invited to share their clinical experiences, concerns, and insights.
Upon completion of the course, participants should be able to:

The School of Medicine, State University of New York at Stony Brook, is accredited by the Accreditation Council for Continuing Medical Education to provide continuing medical education for physicians.

The School of Medicine, State University of New York at Stony Brook designates this activity for a maximum of 12 AMA PRA Category 1 Credit(s)™. Physicians should only claim credit commensurate with the extent of their participation in the activity. 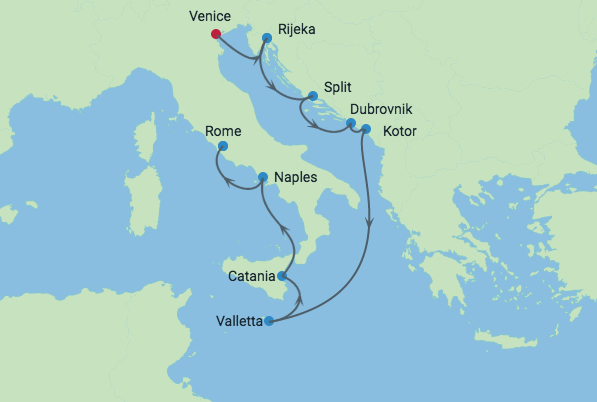 Venice, Italy (Embark) –Venice is possibly the most romantic place you’ll ever visit. The cafes of St. Mark’s Square, Palazzo-lined canals plied by gondolas, the elegant Doge’s Palace, the Bridge of Sighs and the Church of San Giorgio Maggiore offer one impossibly beautiful sight after next. Just walking through its pedestrian only streets is a delight.

And, if you want to enjoy a truly special meal while here, visit one of the excellent restaurants of the Associazione dei Ristoranti della Buona Accoglienza.

And for the art lover, two great collections at nearly opposite ends of art history await: Renaissance era art is housed at Gallerie dell’Accademia and amazing modern art is at home on the canal at the Peggy Guggenheim Collection.

Catania, Sicily, Italy – Catania is one of the major cities in Sicily and is located on the island’s eastern coast between Taormina and Syracuse (see Sicily map). Catania is on a major rail line and has an airport with flights to and from mainland Italy and other European cities. Catania Top Sights: Greek and Roman Archeological Park with remains of an amphitheater, Odeon, Greek acropolis, Roman forum, catacombs, and baths.
Dubrovnik, Croatia – This ancient city is set on a peninsula and surrounded by a 1,000 year old protective wall. Said to be one of the prettiest spots in the world, visiting its old-city, a UNESCO World Heritage Site, is like stepping back in time. Dubrovnik is also a principal filming location for scene’s set in “King’s Landing” from the blovkbuster book (and television series) “Game of Thrones.” There is also excellent snorkeling to be found here in the pristine waters of the Adratic sea.
Kotor, Montenegro – Though small, this city is vibrant and shining and its people are happy to share their city with all who come.
Naples, Italy – Capital of Southern Italy, the largest city of Campania, Naples is the third most populated city in Italy (after Rome and Milan), with over a million inhabitants, and is the most important industrial center and trading port for the South. Naples itself can provide a day’s fun and entertainment, if its somewhat rundown appearance doesn’t dissuade you. Or, join a tour of incredible Pompeii, frozen in time since A.D. 79 when Mt. Vesuvius brought an end to that then-thriving city. Or, take a quick ferry across the bay to the flowery Isle of Capri. Or, (yes, there’s more) visit fabulous Sorrento, vacation spot for the well to do.
Rijeka, Croatia – Croatia’s third-largest city, Rijeka is a bustling blend of gritty 20th-century port and Italianate Habsburg grandeur. Most people speed through en route to the islands or Dalmatia, but those who pause will discover charm, culture, good nightlife, intriguing festivals and Croatias most colourful carnival.
Split, Croatia – The second largest city in Croatia, Split has many attractions but is best known for the many historical landmarks found within and around the walls of Diocletian’s Palace and the 1700-year old harbour beneath it. The Old Town which comprises the palace is in a remarkable state of preservation. In addition, the Split-Dalmatia County has numerous museums, old churches and other archeological sites which make it an important cultural attraction. History, culture, scenic countryside and the sunny weather make Split a sought after destination for vacationers and water sports lovers.
Valletta, Malta – Tiny Malta abounds in forts and temples. In Valletta, wander through the ornate Grand Master’s Palace of the Knights of St. John. Within the thick walls of Medina, the Silent City (no cars), visit the serene Baroque cathedral.
Civitavecchia (Rome), Italy (Debark) – Ah, the Eternal City: Romance, culture, food, history, art and fashion. You’ll have to plan your time carefully as the sights of Rome are captivating and seemingly endless: the Colosseum and Forum, the Pantheon and Trevi Fountain and, of course the Vatican and the Sistine Chapel. And, of course, there are world class museums for lovers of every art era and fine food is easily found (take a brief stroll away from the most heavy tourist areas to find the good stuff). No, you really can’t fit it all in one day (or even a week, to be honest) so plan a couple days enjoying the many pleasures Rome has to offer before returning home from your cruise conference.

Our programs are designed for the specific purpose of allowing the busy professional to obtain the educational course credits required to maintain licensure, while at the same time enjoying a family holiday without spending too much time away from his or her practice.

Each participant will receive a Certificate of Completion for the appropriate category 1 CME credits. But most importantly, you will receive a top notch educational experience and an opportunity to relax, renew and reconnect, an experience available exclusively with Continuing Education Inc. We provide the relevant continuing education you need and place it on an extraordinary "campus" that delivers extraordinary value. Join us!

Addressing Cardiometabolic Challenges Across the Lifespan

We built this site to make finding cardiology continuing medical education conferences and events as easy as possible. We work with different CME providers to provide cardiologists with the most accurate information as possible. We feature continuing medical education events from New York to the United Arab Emirates and everywhere in between. Cardiovascular care is constantly changing. We've taken the time to list only the best in Cardiology conference